Christmas drinking peer pressure: tips and advice for cutting back 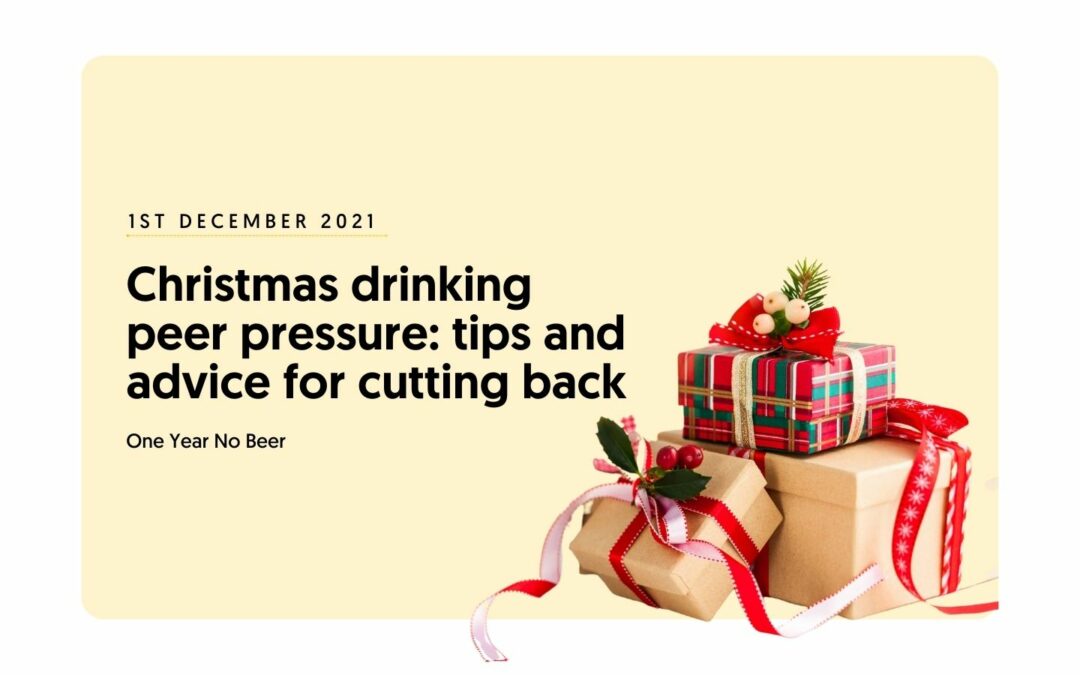 Dreading the pressure to drink this festive season? Worried about temptations? We’re here to help

Andy Williams famously crooned that the festive season is ‘the most wonderful time of the year’, but for those of us keeping away from the booze, Christmas is awash with drinking triggers and peer pressure to drink. After all, the festive season is known for its intensive socialising and spirit of indulgence.

But, fear not: not only is it totally possible to have an enjoyable Christmas while cutting back on the booze, an alcohol-free Christmas could be your best yet. Drinking isn’t a necessary element of socialising, and the festive season doesn’t need to be any different in this regard.

We’ve set out some useful tips and advice on how to deal with Christmas drinking peer pressure below.

There’s no getting around it: The Christmas period brings increased drinking peer pressure.

Take the issue of the workplace. Drinkaware found that 29 per cent of workers felt pressured to drink with their colleagues over the festive period, and more than one in ten (13 per cent) said that they avoid social occasions over the festive season because of ‘the pressure to drink alcohol’.

The good thing is that more employers are beginning to recognise the importance of offering social activities that are not just about alcohol and drinking. If you have any concerns about this and are dreading the office Christmas party as a result, contact your HR department or line manager before to enquire about alcohol-free options and make clear from the outset that you’re not intending to drink.

Another positive recent trend to emerge is the increased availability of alcohol-free options that are now available in most pubs and bars. Sales of non-alcoholic beer skyrocketed by 58 per cent in the UK between 2019 and 2020. It’s perhaps easier than it’s ever been to attend venues that you’d previously be expected to drink in without having to worry about the choices on the menu

Still, you’re probably more likely to be surrounded by people who are binge drinking than at any other time of the year. Some other ways to avoid and combat peer pressure in such situations include:

It’s totally normal to miss something that you’ve become used to when it’s gone. This goes for alcohol, particularly around the Christmas period: You are likely to find yourself in a situation where booze is offered in droves, pitting you directly against the temptation to accept a drink.

One key thing to bear in mind is that these cravings will go away with time as your body adjusts to life without the alcohol intake that it has become used to. In the meantime, however, it’s inevitable that these urges will make resisting Christmas drinking peer pressure a challenge.

The good news is that many people have been in this position before, and there are several ways that these hankerings can be tackled.

The main way to combat Christmas cravings is to plan ahead. Planning for the inevitable urges can help to tackle the triggers that are often unavoidable during the festive season.

Here’s a few tips to fight that Christmas drinking pressure:

Learning to say ‘no’ to Christmas drinking peer pressure

One of the main fears faced by people quitting or cutting down alcohol is finding themselves in those cases where it’s extra tricky to say ‘no’ to a drink. This is a perfectly normal situation to be in. People might not be aware that you’re trying to cut down, and are often just trying to be friendly. This will inevitably happen with more frequency during the Christmas season.

One of the best ways to allay this worry is to game plan for these moments. Often it can be helpful to have a pre-prepared response, to avoid any needless awkwardness. Knowing what to say when faced with a direct test of your will helps to prevent you from thinking of reasons to accept that drink. Don’t give yourself an excuse.

Cutting back on alcohol is one of the most surefire ways that you can look after yourself during what can be a tricky time of the year for our mental health.

Christmas arrives as colder days and less sunlight becomes the norm. There’s a growing body of research out there that explores the link between colder weather and consumption habits. Around 2 million people in the UK and more than 12 million people across Northern Europe are affected by SAD, which can be compounded by the pressures of intense socialising during the festive season.

According to a study of 193 countries, people living in colder regions with less sunlight are more likely to be heavy drinkers, while it has also been suggested that seasonal affective disorder (SAD) – depression associated with late autumn and winter – is linked with higher rates of alcohol consumption as people look to ‘self medicate’.

We know that alcohol also has an adverse effect on our mental health. It’s a depressant that interferes with our natural balance of hormones and the Royal College of Psychiatrists has found that it also affects brain chemistry, increasing the risk of depression. Hangovers, meanwhile, create a ‘cycle’ of illness, anxiety, jitters, and depression. Almost a third of people with depression also drink in excess.

Quitting alcohol can greatly improve one’s mental health, and is linked with making stress easier to deal with. In a study published in the Lancet medical journal, people who had quit drinking experienced a ‘significant’ improvement in their mental health.

It’s worth reminding oneself of this fact when facing down peer pressure: A drink-free Christmas is a reduced-stress Christmas.

…And your physical health

According to Wren Kitchens, the average adult will consume an astonishing 5,373 calories and 180 grams of fat on Christmas day alone. The recommended daily intake in the UK is 2,000 calories for a woman and 2,500 for a man.

That’s just one day of a season that is characterised by consumption, whether it be in terms of mince pies, or any variety of hefty meals and treats that are everywhere during this time of the year. Alcohol consumption can add to this total significantly.

Cutting down alcohol is an easy – and painless – way to avoid stacking up the extra calories on top of an already indulgent season. Caloric levels vary from drink to drink, but all calories in alcohol are known as ‘empty’, meaning they fail to provide us with any nutritional value. What’s more, any nutritional value you get from other foods is wasted because the body prioritises processing alcohol.

When facing Christmas drinking peer pressure, keeping this in mind can be a powerful motivator.

Think about the morning after

It can help to think about the classic phrase ‘play the tape forward’ during the festive season. This classic visualisation technique tells us to picture what could happen to you if you gave in to that Christmas drinking peer pressure. Would one drink inevitably lead to the next, and would it spiral out of control? Would you do something that you regret at the Christmas party? Be less productive the next day?

Instead, ‘play the tape forward’ to visualise what you will be doing instead when you don’t give in to these urges: Extra gift shopping? A more productive morning? Thinking about the positives of what you will do if you don’t take a drink can be a strong motivational driver.

Remember that your wallet will thank you

The maths is simple here. The average UK adult spends £68 during the festive period on drinks alone: That’s the sort of cash that’s worth having aside during one of the most expensive times of the year.

Alcohol is a general financial burden: The average UK adult spends around £1,000 a year on alcohol, which is more than the average Brit spends during the Christmas season altogether.

It’s worth being mindful of this when facing Christmas drinking peer pressure. Drinking isn’t just bad for you – it’s costly too. Do you really need the extra cost during this time of the year?

Journaling can be one of the most effective ways of keeping track of our goals. Consider keeping a diary over the festive period to articulate and document the instances where you felt peer pressure. How did you cope with it? How did it make you feel? What did you learn from that situation? Writing these thoughts down can be a useful way of clarifying your thoughts and drawing valuable lessons from them.

The importance of this is often emphasised in the busy festive period when our thoughts can become jumbled at the best of times: Sometimes just getting something on the page – no matter how rushed or messy – can help us to cope with difficult and challenging situations.

Why wait until ‘Dry January'?

This article has explored the reasons for staying sober or cutting back alcohol that can help power resistance to Christmas drinking peer pressure.

‘Dry January’, where around five million adults in the UK give up alcohol for a month after a heavy bout of drinking is around the corner from Christmas. But why wait until then when you can get a head start now? After all, all the reasons for quitting- reduced stress, anxiety, and better health – are as useful to have during the last part of the year as they are during the first. What’s stopping you from cutting to the chase and getting ahead.