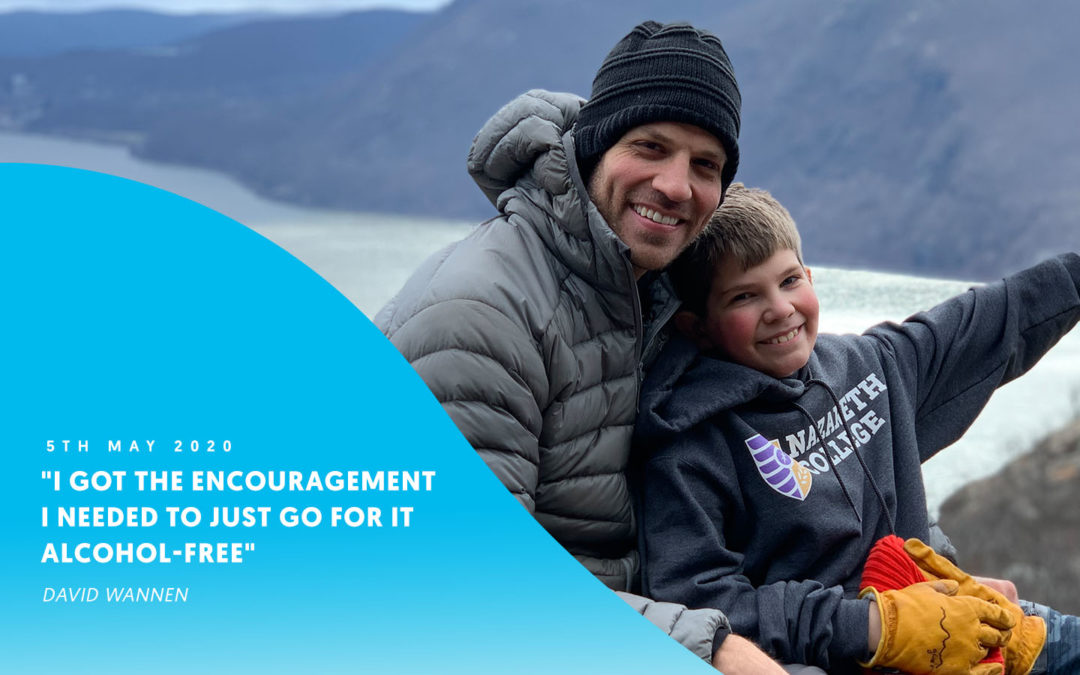 “I starred in over 35 performances during my 90-day challenge, and every single one I did alcohol-free.”

My drinking goes back to the start of my college days – about 25 years ago. I drank a lot in bars with my best friend to make myself feel more confident, or to numb my insecurities. It was around this time that I learned I could manage the stress I felt about any problems with my singing.

After college I moved to New York in 2001 and spent my 20’s performing with various companies and working in bars and restaurants. I drank with my performing colleagues in the city and on tour, I drank when I worked behind the bar, I drank when going out on dates or with friends. Drinking was just pretty much a daily activity.

I was heavily exposed to alcohol from ages 18-29. During this time, I developed strong associations with alcohol – particularly around needing it to be creative, to combat performance anxiety, for social success, and to cope with uncomfortable situations. I developed an associative belief that alcohol put me in the mood to sing and allowed me to do it with more ease, for both physical sensations of relaxation and the numbing the fear that stems from performance anxiety. It was a repetitive that I wouldn’t tackle until I discovered OYNB.

I got married and started a family in my 30’s. I was still performing and managing the company I have performed with for a long time. Drinking became less of a daily thing and more of a binge/event driven thing. As long as I was home, I was a moderate 2 beer-a-night type drinker. But each week-long conference I would do – and there would be 4 of them a year at a minimum – I would spend the entire week drinking. I was a slow drip style drinker. Keep a constant intoxication level but with just enough pace to stay coherent. Sometimes I failed at being coherent.

I drank around and before and after every show in the city and especially on tour. I got to the point of knowing physical alcohol withdrawal symptoms –  night sweats and shakes, having to wean off big drinking weeks with a beer spaced strategically throughout the night. With lack of sleep and my own personal chemistry I often experienced black outs, including recent months before signing up for my challenge. I had many triggers: I would drink at the airport going on tour or to a conference. I would drink to be social at conferences. I would drink after shows to numb the tiredness. I would drink in the morning to relieve hangovers.

Drinking and its after-effects, including brutal hangovers with irritability and loss of control of my emotions, put my relationship with my wife and kids under a great deal of stress. A culmination of events over all these years and returning to therapy led me to decide to stop drinking (at least for a certain period of time) and to consider OYNB, which I had seen advertised on Facebook.

I didn’t have many expectations from OYNB – this was the first programme I had ever tried like this. Because I wasn’t a big at-home daily ritual drinker at the time of signing up for the 90-day challenge, I didn’t find myself with a lot of strong physical cravings for alcohol early on. I was mainly hoping to be part of what seemed to be an amazing support network. I hoped it would help with the big challenges: these ‘trigger’ situations like shows, conferences, travel.  The cravings would kick in on every one of them and kick in hard.

One of the first things I did was reach out to the group about my performing and how it perpetuated my problem drinking. I was very pleasantly surprised to hear from other performers, some who were quite well known as inspirational examples in the group. This was a huge help at the start for me.

What I have learned My biggest learnings come from the personal stories shared and a common theme among active and successful participants in the group – a new perspective on alcohol that called for a reworking of my conscious and subconscious assumptions around alcohol. Multiple experts have studied the science and their commonly held conclusions counter long held assumptions of Alcoholics Anonymous. I learned that strong people can be addicted to alcohol because alcohol is addictive. And that alcohol is truly toxic to the brain and the body. Our own experiences are all the case studies we need.

The outcome I am most proud of is the improved relationship with my wife. It was my greatest why and we have a better communication then when I started OYNB. I am also very proud that I kicked the alcohol performing crutch – I starred in over 35 performances during my 90-day challenge, and every single one I did alcohol-free. I haven’t done this in over a decade. Woo-hoo! A very empowering feeling, as I found I didn’t need it and the drinking was causing the anxiety itself!

Because I wasn’t hitting the sauce hard in the immediate weeks before I officially started, and because I keep up a pretty regular intensive exercise routine (love my Crossfit family), I didn’t notice a huge physical transformation right away from stopping drinking. I am not a big sugar eater, so my weight hasn’t fluctuated that much. I have probably been attracted to a few more sweets since quitting, but they haven’t added up to that great a change in my diet.

However, I did notice much better sleep from the start. My awareness has gone through the roof, and I don’t miss hangovers. I do feel my skin has cleared up and my face looks brighter and maybe a bit younger!

Sharing the journey with the other members in the Facebook group on a regular basis has been crucial. It helped me prepare for when friends said stupid things and kept me on track when I was contemplating a planned blip around performing. I got the encouragement I needed to be brave and just go for it alcohol-free.

I really enjoyed the recommendations of “Quit Lit” and have read This Naked Mind and Alcohol Explained. I also really invested time and discipline into meditating, which has been a huge help and I would recommend the Headspace app to anyone on this programme. It is beneficial to see the full spectrum of experiences in the group as well.

The daily videos were interesting and a nice way to stay connected with the challenge and contemplate philosophies like stoicism and how increased awareness could be a benefit from quitting drinking. Everything seemed to integrate – the OYNB group, the quit lit, the meditation, and therapy.

I signed up for the 365 on the day I completed 90, knowing I have a lot more work to do to continue to improve my relationship and actually put the progress to good use. I can’t imagine doing that drinking. I have made it through an entire cycle of trigger scenarios over the course of 3 months, so I am given confidence that I can do the year.