“I could feel myself getting happier step by step” – Stewart Macleod

“Any fear I have is no longer about a life without alcohol, but of giving up everything I have gained on this journey.”

As I moved through my adult life, the way I handled alcohol evolved dramatically. From a social drinker who enjoyed a night out, I found myself becoming someone who used alcohol as a crutch. My relationship with alcohol had changed and the more I thought about that, the more concerned I became.

Even once I had realised the severity of the situation, it took years to do anything about it. I was in a cycle of drinking at work events, drinking when out with friends, drinking when I was at home relaxing, drinking because it was the weekend and drinking for any other excuse I could find. No matter how many times I promised myself I would take a break or moderate, it never lasted more than a couple of days.

All of this eventually became too much 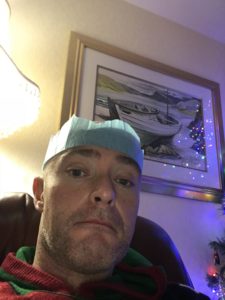 At the tail end of 2018 I knew there were issues. I worried they were unfixable and felt like I was living life in a haze. Everything felt oppressive and I was anxious and angry a lot of the time. I could see that it was affecting relationships with my friends, my partner and my kids and I wasn’t being the person I wanted to be. I think I actually despised who I was becoming.

Not that anyone else knew all this. Not once did I speak about my feelings or fears. I was performing well at work, had two great children, was in a very fulfilling relationship and was always the first person to crack a joke or laugh when in company. To the outside world I was fine, probably even doing very well. However, I feared that I was teetering on the precipice… one wrong step or a failure to get a grip on this could royally mess up my life for good.

Finding One Year No Beer

When I started the OYNB journey I genuinely did not expect it to be a success. I couldn’t see me getting through the first week, let alone any of the challenges. I had tried so many times (at least every Monday morning for about three years) and had failed at every turn. I am also an inherently introverted person, and I believed that engaging in the OYNB community was not going to work for me.

Yet I was wrong on both counts. From the moment I joined I immersed myself in reading the posts on the facebook page, hearing about other people’s successes and failures and picking up on the themes that came through. There was so much positivity in the group and people kept highlighting the benefits they were seeing being alcohol-free – that I believe is what made the difference for me. Their stories showed me that this journey could be managed and when I read about the starting point that some of them had come from, getting to 90 days alcohol-free suddenly felt achievable for me.

The group has also changed my way of thinking and for the first time I revelled in the positive aspects of not drinking. Prior to this I had always focused on what I was missing, and I worried that life (or I) would never be as interesting again without alcohol. Yet on the OYNB group I was seeing people talking about sleeping better, losing their anxiety, gaining focus, gaining energy, losing weight, eating and exercising better, and so much more. Slowly I began to realise I was experiencing these benefits for myself. I could actually feel myself getting happier step by step and this is what kept me going, a tangible feeling of progress and achievement.

I am now at a point where I know I won't drink again. Any fear I have is no longer about a life without alcohol, but of giving up everything I have gained on this journey. I cannot possibly cover every benefit I have experienced from being alcohol-free. Almost daily I do or think something that I wouldn’t have been equipped to do if I were still drinking.

However, here are a few of the main ones I am grateful for:

Without OYNB I wouldn’t be where I am, I have no doubt about that. I was not going to be able to address my drinking on my own and I know that because I had tried so many times. By introducing me to the positivity of OYNB and the focus upon the benefits of being alcohol-free, I was suddenly in an environment where I celebrated success.