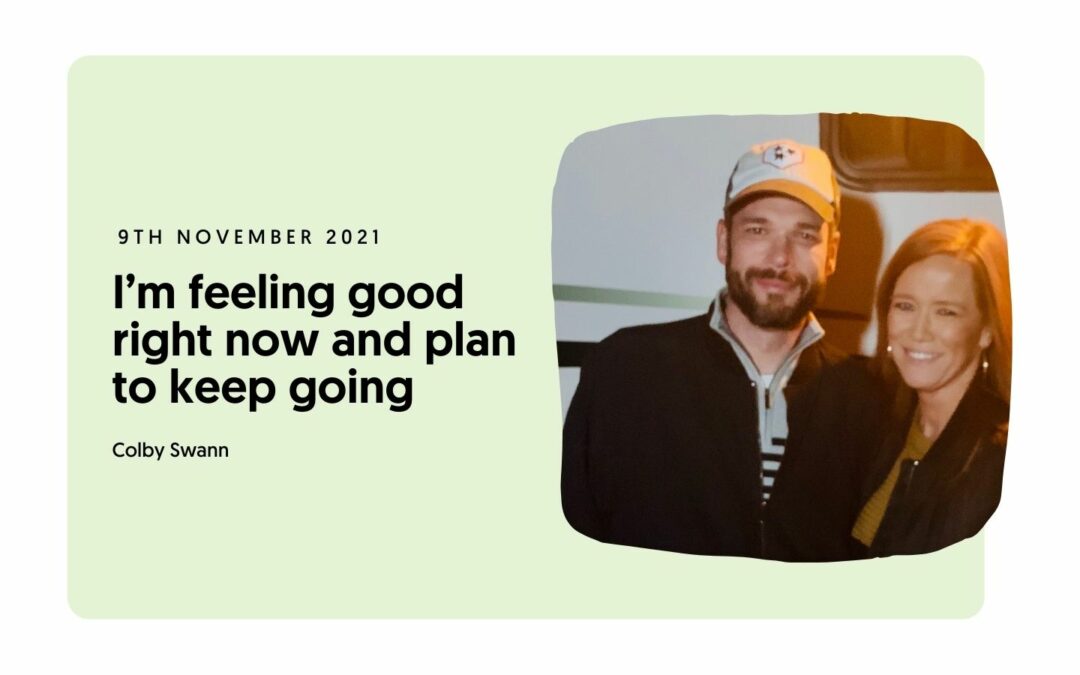 Today I am 166 days alcohol-free, with no blips. I pass the liquor store and don’t even realise it’s there.

I have lived most of my adult life overweight or obese. After university and with children, family and desk work, I was often sedentary. Over the years I tried many diets and exercise programs but I could never seem to kick the sweets and had a strong tendency to binge eat massive amounts of calories. I only drank occasionally in those days, tying one on here and there socially and sometimes on weekends.

In May of 2017 I appeared on a local morning program for a new retail store we were opening. I was horrified when the camera came on and I could see what I had become, someone in excess of 320 pounds. My mind told me I was something different and I always shied away from pictures. That day, I was faced with the grim reality that my weight was out of control. My life, in fact, was out of control.

I opted for weight loss surgery, and it was transformational. I went from a 43 BMI to a 24, settling in the mid 180s lbs range over the course of a year. I was healthy, exercising, eating right and, for about 6 months – alcohol-free. But my brain still was the same old brain and my stress relief and self-medication slowly moved from food to alcohol. Because I couldn’t eat much do to my reduced stomach (in addition to being much lower weight), the alcohol had an immediate effect on me. One drink would send me into a buzz and by three drinks I was in a stupor. This became a new habit for me.

Beer was tough on my stomach due to the carbonation, but hard liquor was just fine (and more effective I thought). I progressed to the point where I was going through around 1000 ml of bourbon whiskey per week. I would usually drink alone, and it was almost every night during the work week. On weekends, I would start at around noon and drink continuously during the day. I even found myself taking a bourbon on the rocks to bed with me and my last drink many nights was one immediately followed by my head hitting the pillow to sleep.

I became really worried about my drinking. The alcohol was beginning to affect my weight. I had gained up to 198 lbs. This may not seem like much to some but for a weight loss surgery patient, hitting 200 lbs again is literally the greatest fear. I was also having some strong withdrawals when trying to quit – I would even begin to twitch when I passed the liquor store. I tried cold turkey to stop, but I would only be successful for a few days.

On May 28 (U.S. Memorial Day), I finally decided to make a move for good. I had noticed the OYNB programs via Instagram and Facebook, and started looking into it. I thought it was designed for me – someone who wasn’t an alcoholic but still wanted some support to get their life back in order. I signed up originally for the 90-day challenge and was off to the races!

What did I hope to achieve?

I wanted to see if I could break my perceived dependence on alcohol. I felt unsure in the beginning as I had tried to quit on my own in the past, but I decided to take it one day at a time. I was surprised by how easy I found it to quit this time around. I think being able to speak to the community and see it as my choice to politely decline alcohol that has helped me to make a breakthrough. I look forward to being able to say, “I don’t drink alcohol.”

I was motivated by a newfound understanding of my relationship with alcohol and the science behind what it does to me; The physical effect alcohol has on the body and brain; The mental aspects of human behaviour that leads to alcohol dependence; and the strategies for replacing alcohol to cope with said behaviours.

I have experienced multiple positive outcomes. I was able to drop the 10 pounds I had gained – getting back into the high 180s, where I want to live. I have a lot more confidence at work, whereas before I had a continuous sense of paranoia that clouded my judgement. I feel better physically. I’m more attuned to nature around me, I enjoy relationships more (I’ve always been an introvert) and of course I have one less persistent issue (drinking) in my life I have to worry about.

A few things I find valuable in the program:

Today I am 166 days alcohol-free, with no blips. I pass the liquor store and don’t even realise it’s there. I’ve been very successful in completely suppressing the desires for alcohol. In fact, it’s been easier than the desires I had over time with food. Additionally, I’ve gained confidence to be proud of being alcohol-free, speaking about it publicly with friends, politely declining the whiskey or beer at business dinners or social events. I’m feeling good right now and plan to keep going, day by day, one day at a time.