“The group became my rock, and I used it daily for inspiration. So many success stories to fill me with hope, and the failures only helped me see how supportive everyone was.”

I actually took a break from alcohol four years ago, after spending ten days at a silent meditation retreat. Intoxicants were forbidden during my stay at the centre, and by the time I had completed the course I felt so clear in mind that returning to my old partying ways was of no interest to me. Vipassana, as the course was called, means to see clearly; and as a Vipassana meditator I was seeing clearly for the first time.

I spent the following four months adhering to this precept, and despite the bafflement of my friends, found it to be a pleasant experience. I still socialised, but drove everywhere and was able to live out my life without the downsides of hangovers and tiredness. It’s a wonder I ever drank again, after finding to be so much happier without booze. 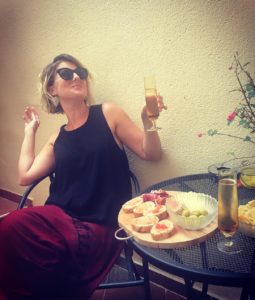 I took a job in Antigua, West Indies, and my life path changed beyond recognition. One set back to this new life, was my return to alcohol. Anyone that has spent time in English Harbour, Antigua, will know the drinking culture is huge there. Sailors, expats and locals alike partake in copious amounts of rum; spirits are high and life is one long party for the yachting season.

I got completely sucked in by it, every night there was something on, someone arriving, someone leaving, a cool band was on, dinner parties, BBQs. As a hairdresser working lates my social life in London was restricted to one night a week, but in Antigua EVERY night was Saturday night. My spiritual practice waned to almost nothing, even when I felt especially hungover I couldn’t bare to take myself away to the beach and meditate to feel better but rather wallow in the existential dread.

It went on like this for four seasons, and when not in Antigua, I spent summers in Palma, Mallorca – where all the same sailors hung out and drank the island dry. On the surface I was having a wonderful time, always laughing and joking, making friends and memories to last a lifetime. That is, until the morning would come and I’d be hungover as all hell. It never occurred to me that this lifestyle was bad for me. I could calm down at any time, I thought, I’m just having a good time.

Then it started to change

My mother’s death saw a shift in how I drank. It was no longer getting carried away with the moment and having a sore head the next day. I started to drink until I blacked out, and the following day couldn’t remember a single thing that happened. On my days off I started drinking during the day and didn’t stop until I passed out at night time. It never seemed unusual, as most people I hung out with did the same. Bloody Marys at brunch, beers on the beach, Pina Coladas at sundown, wine with dinner. At no stage did I worry about this level of consumption because I was getting up to go to work every day and wouldn’t have another drink until I had finished for the day.

Looking back on this time I can see how excessive it was, but at the time it just felt like the good life. On these heavy drinking days I started to develop a blotchy red rash on my face and neck that would cause me to overheat and become breathless, but instead of stopping, I would take an antihistamine and switch from wine to vodka. It seems crazy to me now, that in the face of my immune system screaming at me to stop poisoning myself, I would just ignore it. My safety was completely disregarded, and in my blackout state would get into very compromising situations that could have cost me far more than just a red face. Still it didn’t deter me, and I kept on drinking.

Finding One Year No Beer

One morning after a triple bottle wine binge, I felt so ashamed of myself and I reached for my phone to numb in some other way – and that’s when I scrolled on to OYNB. Without a blink I signed up to a 28-Day Challenge, and continued my pity party hangover miserably unaware of the wonderful fruits that were about to come my way. I was overcome with shame, I felt like a pathetic loser and identified with the ‘alcoholic’ label. I communicated these feelings to the group and was inundated with love and support. Never before have I received such a positive response from a Facebook post! 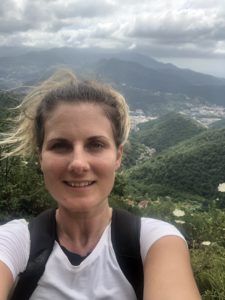 The group became my rock, and I used it daily for inspiration. So many success stories to fill me with hope, and the failures only helped me see how supportive everyone was. This challenge has been the catalyst for my own healing, and though I have not lost a bunch of weight or climbed a mountain like so many of the other successful OYNBers have; I am in a more powerful place than ever before.

For me, this is a spiritual journey. One that I could not have taken while intoxicated, and it is only now with a mind clear from drunken apathy or hungover anxiety that I realise where my path is leading. Whereas drunk me would watch Netflix for hours, sober me reads books on mindfulness and spirituality. The healing and learning that I have accomplished in the short time I have been sober is astonishing; I feel as though the veil of alcohol was the one thing stopping me from becoming my best self, and now it has been lifted.

The benefits alcohol-free life has to offer

One of the biggest changes has been my productivity, I have finally managed to get myself out of debt and no longer struggle pay cheque to pay cheque like I did for years. Being drunk every night and hungover every morning meant that I was awful at life admin; I would avoid it like the plague and hope that it would sort itself out. I have started to take care of myself, little things like a beauty regime at night, exercising daily, meditation – these things were always forgotten when I was drunk.

OYNB served me as a daily reminder that I was bigger than my relationship with alcohol, and I am capable of so much more than throwing my life away. The Facebook group was a lifeline, and the support from other members filled my heart with so much appreciation. My admiration for Andy and his dynamism inspired me to reach higher in my own life, and the recommendations for literature have allowed me to increase my knowledge on alcohol way beyond my expectations. This experience has been a huge revelation, and now begins the next phase of my life…the best phase yet.