Be bold and proud, but if you aren’t ready to tell all, here are some good responses to questions about your AF challenge – by Daisy Steel

When you give up drinking it’s understandable to be worried about what people are going to think about your decision – especially if you’re known as a bit of a party animal. I used to run all sorts of imaginary conversations in my head when I first went alcohol free. Would people judge me? Would they think I wasn’t fun anymore?

But I can honestly say in the last two years there have only been a couple of times when I’ve been really pushed about not drinking. The majority of people are interested in finding out more – in fact it’s a great conversation starter.

That said, it’s a good idea to have some responses ready, because people do often ask for more – especially people you’ve partied with in the past.

Here are a few suggestions of what you can say in different situations:

If you’re at a party and someone you don’t know very well (a colleague, for example, or someone who knows people you know, or is in the same social circle) comes up to you and asks if they can get you another drink, be ready with an answer. In your head, you’re thinking if I don’t ask for alcohol they’re going to think I’m pregnant or a raging alcoholic or a control freak or something. In fact, they’re probably running their own mental gymnastics that have nothing to do with you. If they ask if you want another drink and you don’t want to get into the whole no drinking thing, it’s perfectly ok just to say “no thank you.” But equally, it’s just as ok to reply “Yes, I would love a fresh lime and soda please!” If they ask if you don’t drink, a good response is: “Not tonight.” If they ask why, you can say, “I just decided not to” This is honest and firm, with no further explanation needed, and then you can just move the conversation on.

You may think your close friends or family members will be disappointed that you’re not drinking, but in reality, they truly love you and want what’s best for you. You may have had some great times together when you were drinking but booze is unlikely to be at the centre of your relationship and it’s definitely not what they like most about you. In your head, you might worry they’re going to stop inviting you to things because they might find the alcohol-free you boring.

Rehearse how you’ll respond before you put yourself in a social drinking setting with them. If you aren’t ready to tell them that you’ve given up booze, sometimes having a cover story, like “I’m on antibiotics and I can’t mix my pills with alcohol” is a good response. Another thing you can say is just a simple, “Actually, I’m not drinking tonight.” If they ask why, you could say something like: “Too much going on tomorrow. But I’ll have a diet coke/ insert soft drink of choice here.”

I often take the car to parties or other social occasions now. Telling friends you can’t drink because you’re driving is a failsafe get out of jail excuse. They’ll also thank you when you are the one that can drive them home at the end of the evening.

But if they’re a very close friend, you could also think about inviting them in. Err on the side of generosity – people are often more supportive than we imagine they will be. You could say something like: “I’ve been thinking about it a lot and alcohol isn’t really working for me anymore.” Or, “I stopped drinking a few days/weeks ago and I feel so much better without it. But it’s also been hard. I’m not going to lie – I could really use your support.” This is likely to open the door to a bigger conversation.

A few weeks into my alcohol-free journey, I didn’t mind talking about it. The more people who knew what I was doing, the better – less isolation, more accountability and more transparency. 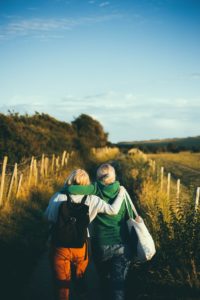 This probably the hardest one to deal with. They will definitely notice if you’re not drinking because of the amount of time you’ve spent together clinking glasses.

I would advise telling them prior to making plans to meet up. It doesn’t need to be a complicated conversation. A simple text will probably do the trick. If you don’t, your friend may feel there is room to persuade you and the whole situation could be stressful. It will also be uncomfortable for them and they may end up surprised and confused.

In the text, it’s a good idea to tell them you’ve signed up to a challenge like “One Year No Beer.” People are much more accepting if you describe something as a “challenge” – a bit like telling them you’re training for a marathon. You can even make a joke about it – and at least they’ll have had time to get used to the idea before you meet.

When you get together, resist the urge to over-explain or say sorry. You may have to endure some prodding but don’t worry – the moment always passes and you will never be disappointed that you didn’t drink.

If they persist in putting pressure on you to have some alcohol, you can always leave the situation. You might want to reflect on whether they’re the kind of friend you want to be around when you’re trying to go alcohol free.

Be bold and proud!

As time carries on, and you build momentum in your AF journey, these conversations become easier as your friends and family begin to see the positive physical and mental changes in you. You never know, they might want in on some of the action and join you!