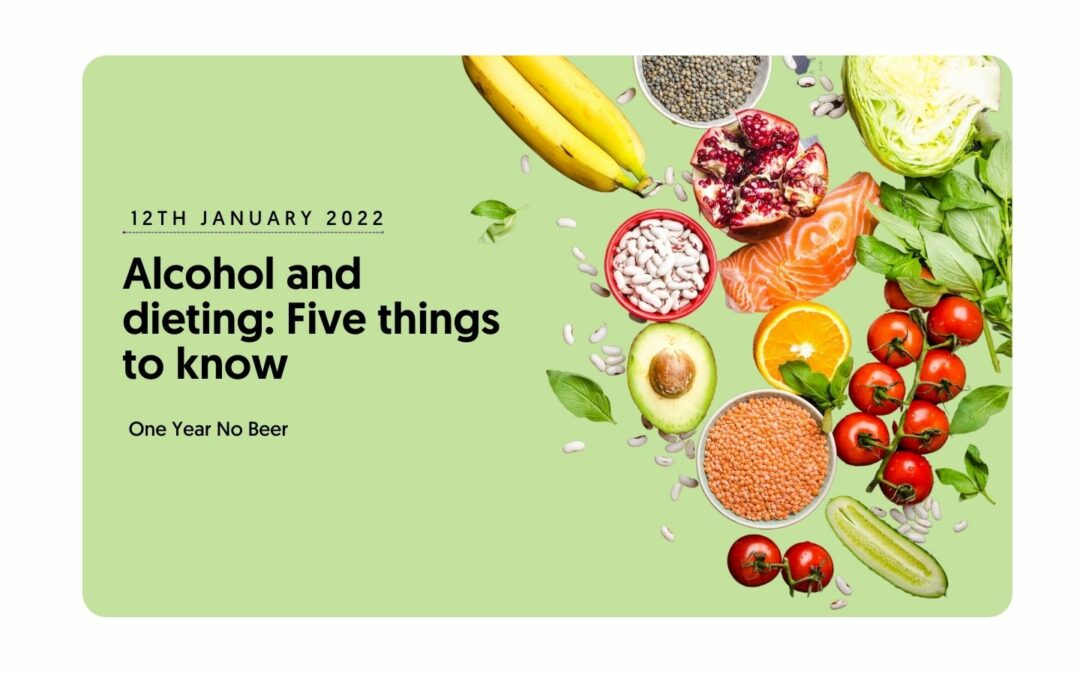 For many of us, the beginning of a new year often means a new diet. Here, we unpack five things about the relationship between dieting and drinking – the two are more connected than you might think…

Dieting. An estimated 26 million people in the UK alone have started one this year, and 63 percent of us say that we’re trying to eat healthily all the time. After all, to borrow (and heavily rework) a phrase from the Dogs Trust, a balanced diet should be for life, not just for the New Year.

When we think about what a diet entails, several things will probably come to mind immediately. Eat more fruit and veg! Cut down on junk food! Count those calories!

But one aspect of dieting that might not be immediately obvious is the role of alcohol. Diets are most often associated with the food that we consume, but when considering our diets more broadly, ‘you need to think about what you are drinking as well as what you are eating’, says the NHS.

In this article, we’ll look at five things to know about how alcohol impacts our diets. Whether you’re undertaking a specific regime or just trying to maintain a healthy everyday balance, alcohol will have a part to play.

Ah, calories. The lingua franca of pretty much every diet out there. Whether it’s keto, Atkins, or an old-school balanced diet, no matter what regime that you’re on, calorie intake will play a fundamental part.

For a healthy, balanced diet, the daily intake recommended by the UK government (and many others around the world) is around 2,500 for men and 2,000 for women.

Counting calories is most often associated with keeping an eye on food labels, and making educated decisions on what we eat accordingly, but we seldom consider our liquid intake.

This is quite understandable as it’s very easy not to notice. When was the last time you went into a bar and saw calorie labels on every drink? That’s why alcohol is often called a ‘stealth’ calorie’… booze can slyly rack up our daily intake without us realising, which can have a knock-on effect on our attempts to eat healthily.

It can be helpful to compare our alcoholic intake to their food equivalents to illustrate their calorific heft. The reality is that calories in alcoholic drinks can often be as bad –  if not worse –  than highly processed food.

Most alcoholic drinks are created from fermented starch and sugar, which explains their calorific richness. For example, four bottles of wine a month is equal to 27,000 calories – or about 48 big macs a year. Five pints a week? Around 44,200 calories – equivalent to 221 doughnuts. Any diet could do without those kinds of figures.

The British Nutrition Foundation created the concept of the ‘quality calorie’ to unpack this.

Essentially, good calories are not just about numbers, but nutritional value. For example, wholegrain bread is high in fibre and healthy proteins, despite the fact that its calorie content is comparable to white bread. It’s this sort of thinking that grounds any healthy diet. Calories are a benchmark for consumption, rather than a goal in and of itself. Otherwise, we could just eat our recommended daily calorie intake in gummy bears. But life is unfair like that.

Predictably, alcohol falls into the ‘bad calorie’ category. They literally provide your body with no nutritional value, with the added downside of lots of calories.

This helps to explain why phrases such as ‘beer belly’ are far from being myths. Foods that are high in sugar content, such as, yes, those gummy bears, tend to be high in calories. And those extra calories, when not used, end up on your waistline.

Not only does it pile extra calories onto our lifestyle, but alcohol can also disrupt our sugar levels too.

According to Drinkaware, alcoholic drinks account for 11 per cent of the UK’s daily intake of added sugar, and some tipples can contain as much as 12 teaspoons of the stuff.

We know that too much sugar is a bad thing. When it comes to alcohol, this essentially boils down to the fact that alcohol is also treated as a fuel source by your body. Without getting too technical, this essentially means that when your body burns fuel, it will burn alcohol first, so that the excess glucose found in booze ends up as excess tissue or fat. Not ideal for any dieter.

Like calories, the amount of sugar in alcohol is something that we don’t often consider. Did you know, for instance, that a pint of cider can contain up to five teaspoons of sugar – almost as much as what the WHO recommends you consume in a day (around 30 grams)?

Alcoholic drinks aren’t always the sole offender here – it’s what you mix them with that can be a killer, too. The sort of drinks mixed with spirits, such as sugary, soft drinks, can add up to 30 grams of sugar to a standard-sized drink. It’s hard to square this sort of excess sugar consumption with a healthy balanced diet.

Excessive sugar consumption has a direct link with weight gain, but it is also linked to a variety of other health problems, covering everything from tooth decay to type-2 diabetes.

While some types of alcohol, such as beer, seem to have low or none of the white stuff on the face of things, they can still affect our blood sugar levels.

It’s an unnecessary dietary hindrance, especially when you consider that there are plenty of alcohol and sugar free alternatives out there to enjoy.

As we’ve already explored, the key to maintaining an effective, balanced diet is by supplying the body with the right amount of the right nutrients. It basically comes down to eating and drinking varied amounts of the things necessary for our bodies to function at their best: it might sound boring, but that’s the key to good health.

But what if our body struggles to absorb the nutrients that it is being fed? Several studies have shown that alcohol can negatively affect the way that our bodies break down nutrients in a number of ways.

Some of these ways include lowering the secretion of digestive enzymes from the pancreas, damaging the cells that line the stomach and intestines (making it harder for the body to absorb nutrients), disabling the way in which some nutrients are transported into the blood, and interfering with the body’s microbiome.

So in many ways, you could be eating well, but the effects of doing so could be moot because of the booze. The latter affects the former. As we all know, vitamins and minerals are important for maintaining good bodily function.

Studies have also shown that alcohol can affect the way that the ‘machinery’ of the body, interfering with our ability to metabolise them in the first place, which leads to deficiencies. In other words, no matter how much kale you eat, it won’t help.

It goes some way to explain why when we go alcohol-free, the body craves nutrients more than it does when we’re drinking regularly. Fortunately for you, we here at One Year No Beer have compiled a handy guide as to how you can tackle that very issue.

This one sounds straightforward, but that’s probably because it’s true: when we drink alcohol, we’re more inclined to eat badly. It’s not just you – the ‘drunchies’ are a real thing.

According to a study in the Californian Journal of Health Promotion, people are more likely to opt for salty snacking options such as pizzas and burgers when drinking. A joint study from the  National Institute on Alcohol Abuse and Alcoholism (NIAAA) and the National Institute of Health and the US Department of Agriculture also found that we consume 9 per cent more fat on days that we’re drinking, and speculated that this was partly due to our becoming more ‘impulsive’ when we drink.

Due to the fluctuations in our blood sugar levels, drinking alcohol also can cause hunger levels to spike very quickly by stimulating our appetite and can encourage overeating.

Adding to the dilemma is the fact that we’re more likely to eat unhealthily when we're hungover. The metabolism of alcohol can lower your body’s storage of glycogen – the stuff that the body uses as fuel, which we get mostly from carbs and sugar. Now you see where those morning-after cravings for greasy pizzas come in.

Alcohol also causes a reduction in anti-diuretic hormones. Less of this means your kidneys are less able to absorb as much water: this is why you simultaneously need to pee so much and feel dehydrated the morning after. Dehydration also adds to our cravings, making us clamour for salty food, which we misguidedly believe will help us to ‘soak up’ the booze from the night before.

So not only is drinking calorific in its own right, it actively forces us into unhealthy spirals, stacking the cards against us when we’re trying to maintain a healthy diet. As we’ve said previously, it’s something of a ‘gateway drug’ to health.

The relationship between alcohol and your gut – it’s not good, folks.

An increasing body of recent research has highlighted the importance of the gut in our physical and mental health. Google searches for ‘gut health’ rose by 83 per cent last year alone as a consensus has emerged in the role of a healthy gut in maintaining levels of bacteria and immunity, as well as how it communicates with the brain. It’s kind of a big deal.

I might sound like a broken record by now, but yes, this is something that alcohol can also mess with. According to an entry in the Nutrition in Clinical Practice journal, minimising alcohol helps to support a healthy gut, because booze causes an inflammatory response, causing your stomach to produce more acid than it should. This can lead to some nasty issues such as acid reflux and peptic ulcers.

But it can also have additional knock-on effects on our diet such as constipation, a loss of appetite, and bloating. You don’t want to mess with the gut. If it’s working well, it can improve your mood, digestion, sleep, brain health, heart health, and lots of other benefits besides. A healthy gut is a healthy body and mind. Why let alcohol disrupt this?

Well, there you have it. Alcohol, it’s safe to say, is like dieting on the hard mode. Not only does it add extra calories and sugar to our daily intakes, but it also negates the positive habits that we’re trying to form when we diet. Quitting alcohol is one of the sure-fire paths into a more healthy, balanced lifestyle. If you want to learn about how it has affected people from all walks of life, you can find our success stories here. What’s stopping you from supercharging your diet?