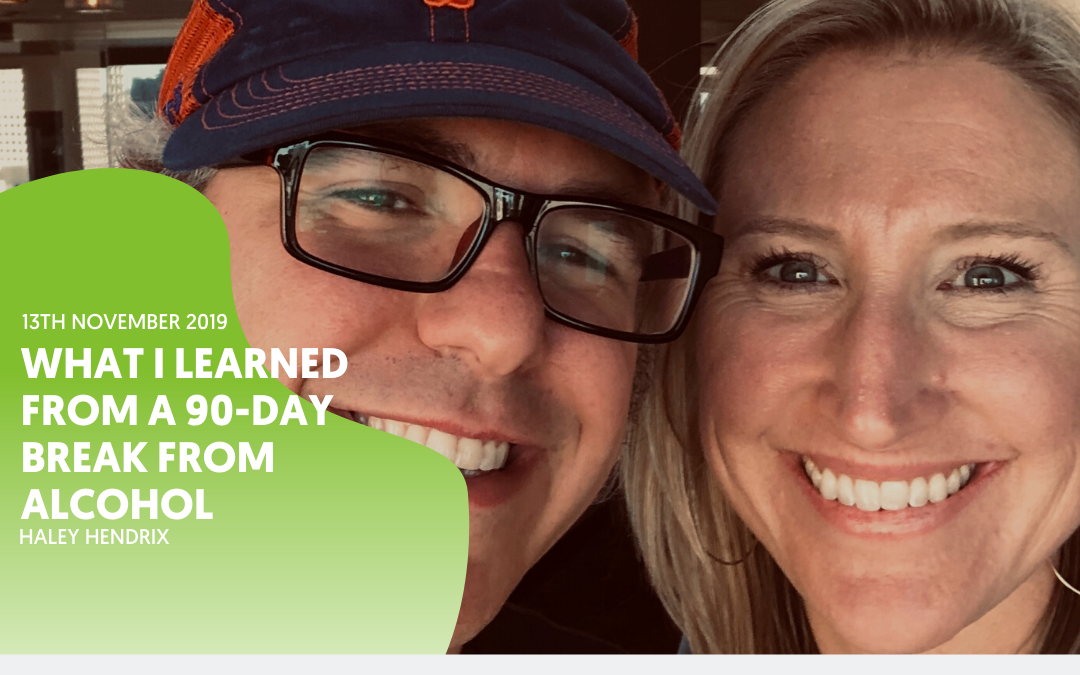 My name is Haley, and I’m 97 days alcohol-free!

It’s funny because ’97 is the year I graduated from high school, and if you would have told me that some 22 years later, I’d find myself embarking on a one-year alcohol-free experiment, I would have told you that you were nuts!

My story is common, or at least so it seems. I drank like the normal college kid who attended a “big party school,” and then continued drinking through life’s celebrations, its highs and lows, all the birthdays, most of the dinners, definitely all the stressors, 100% through all the parties, when my kids drove me nuts, at holiday gatherings, every Friday night, loads of Saturdays nights, and heck…sometimes just through all the nights.

Mostly my drinking was controlled (or so I sold myself), typically not having more than two glasses of wine at a time. But unlike some people, when I woke up, I found myself negotiating if I would have a glass of wine that night or not. I’d wake up with great resolve, but by the afternoon it waned, and if something small set me off in the evening, I was reaching for that bottle of pinot and feeling validated by that oh-so familiar sound of the cork popping out of the bottle followed by that comforting glug-glug-glug as wine poured into my oversized glass. My pattern was simple, I’d tell myself I was only going to drink Friday and Saturday nights, I’d be successful for some time, and then my rule would get relaxed and stretched and then was nonexistent. I’d go on for a couple of weeks drinking 4 or 5 nights a week, and then I’d pump the brakes. I didn’t like this feeling, and sometimes I questioned if I was in control, or if the vino was controlling me, but the thought of giving it up beyond dry January or a 30-day fitness challenge was outside of the confines of my imagination. I didn’t like that I couldn’t envision my life without alcohol, and given my gene pool, that was a scary feeling. 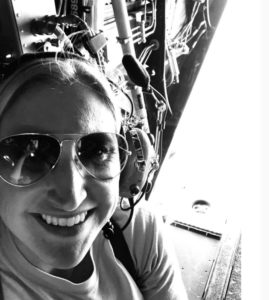 Then this past July, something extraordinary happened. I was finishing up a 3-week work trip in the UK and was sitting on the tarmac (delayed) at Heathrow. I struck up a conversation with a woman sitting next to me on the plane. Somehow, it came up in conversation that she was alcohol-free. I peppered her with questions, and she challenged me to go AF for one year. I initially laughed at loud, but something in my heart changed at that moment. The thought of previously quitting was completely off the table, so how could it be at this moment that I was embracing the idea? Was it my competitiveness and stubbornness? Was it the scary realisation that if I couldn’t give it up for a year (or even a month) that I was becoming exactly what I feared? Was it God trying to show me something? Open a door for me? Two movies and a bag of airline pretzels later, it hit me, it was all the above, so I said yes. By the end of the flight I decided I would write a weekly accountability blog to share my experiences and keep myself accountable, and by the time I returned home to California, Sober Curious Gal was in forward motion.

A trip away alcohol-free

My journey has been surprisingly easier than I expected. Two weekends ago presented a new “alcohol-free first” for me…out of town travel. Traveling without my kids makes me giddy. I love my children, I really do, but traveling without small children feels like you’re getting away with something. It feels like an exciting nostalgic throwback to simpler times. It makes you remember who you were, and it feels so easy.

It’s no wonder that for many of us, when we think about traveling away from home (without our small children in tow), we probably include some type of craft cocktail, ice cold beer, or something with an umbrella popping out of the glass when we daydream about our new-found adult freedom.

As we were driving towards San Francisco, I couldn’t help but remember all the booze fuelled memories and delicious food and drinks that I’ve consumed there in the last two decades. I knew that our crew for my dear friend’s 40th birthday had incredible taste (for food and booze), and I was having a wee bit of FOMO as we started to approach the bay. I wasn’t sure how this group would receive my newfound sober curiousness, and I wasn’t sure how I would feel in this group without a wine glass in hand. 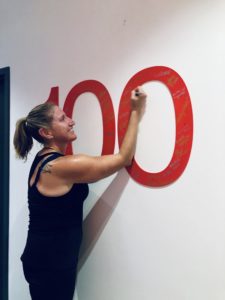 Hubs and I, without realising it, set the stage for success as we sped up the highway in our minivan. We had a frank and open discussion about what I appreciated about myself in this last several months of going alcohol-free, and the positive changes that he recognised in me. By focusing on this slew of personal growth to include having more patience with the family, being “nicer” (ouch, but true) to Hubs, having more energy, being happier, seeking out joyful moments every day, being more aware of what I was actually feeling, and noticing that I’ve become more goal and action oriented, it helped me to articulate and recognise that the last three months have represented an awakening for me. In reading, researching, and writing this blog, I’ve self-inflicted an intensely personal deep-dive into not only my past relationship with alcohol, but also recognising how I used it as my primary coping mechanism for everything in my life.

Ok, back to the 40th dinner party…

The party was magically perfect. The temperature was a freakish 80 degrees, which NEVER happens in the city. My friend’s husband organised a champagne reception, had rented out half of Piperade (a delicious Basque spot in the Financial district), and curated a wonderfully paced evening. All around me wine was-a-flowing, but it didn’t feel tempting. The server kept bringing me these delightful club sodas with lime slices wedged around the outside of the stemless wineglass with a green and white paper straw sticking out. In a way, the simple gesture of “dressing up” my club soda made me feel special.

No one was bothered that I was not drinking; in fact, no one seemed to even notice. There was a small moment when my steak came out that I wished I could savour a little pinot, but that was very short-lived. As the night went on, I noticed that I was a better conversationalist, and genuinely more interested in what people had to say instead of focusing on drinking. As the night transitioned to an after party at a nearby wine bar, I was surprised that I still had energy while other people around me started to look tired, and smugly I was excited that I was going to feel rested and refreshed in the morning. The other thing is that because of the club soda, I was actually hydrating during the evening-an added bonus and had zero drunk munchies when we got back to our hotel.

The Basque have an expression…happy nights, sad mornings.

For many years, I repeated this every time I had a bad hangover. It was the price to pay for having a great time the night before. But what if you could have happy nights and happy mornings? Sunday after the party, I woke up at 0800 feeling rested and ready to enjoy our final day in SF. I couldn’t help comparing my newfound sober curious-post-party-Sunday-self to how I would have felt had I chosen the path of drinking at happy hour at our hotel, having some bubbly during the reception, wine with dinner, and more wine at the after party. And while some people could make it through that landscape having about two drinks in total for the entire evening, that person is not me. Without a doubt, I would have been dreadfully hung over that Sunday.

In contrast, not being hungover gave me license to create a whole new agenda. Instead of calling down to request a late check-out, I jammed out of the hotel that morning to a Soul Cycle class, something I’d always wanted to try. Then I met up with the same Sister that challenged me to go alcohol-free for a year for brunch and had a great time hearing about her recent life adventures and sharing my journey with her.

This was topped off by a quick drive and long walk through Golden Gate Park to Hardly Strictly Bluegrass where we happened upon this funky, super cool Ukrainian band, DakhaBrakha. After all that loveliness, I still had the energy to enjoy podcasts and conversation on the way home with Hubs and be present for the kids when we settled back into town that evening. I wasn’t grumpy, I didn’t need a nap, the day wasn’t centred around what I needed. The day was centred around connecting with people, trying new things, inhaling the intoxicating city culture of SF, and truly finding joy in the adventure.

I challenge you to try on this idea of sober curiousness. You don’t have to commit to giving up alcohol forever, in fact, for many that’s not even necessary (jury’s still out for me). But I would encourage you to think about how alcohol is serving you. If you believe it makes you funnier, happier, and more magnetic, I’m here to tell you that you are already ALL THE THINGS.